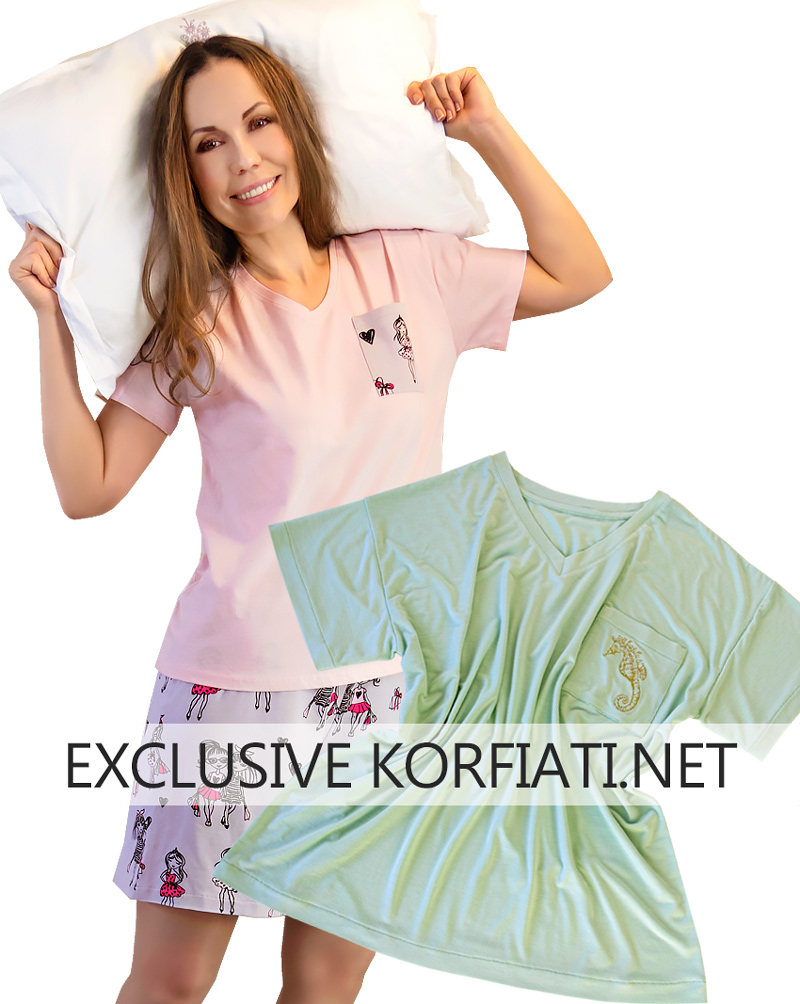 This cute and comfortable set for sleeping: t-shirt and shorts were created by Anastasia Korfiati especially for the book “Clothes for Home”. The loose-fitting T-shirt and elasticated shorts have a comfortable fit and are made from cotton jersey.

The technology of sewing knitted T-shirts has certain features:

Sew one shoulder seam with a four-thread overlock stitch. 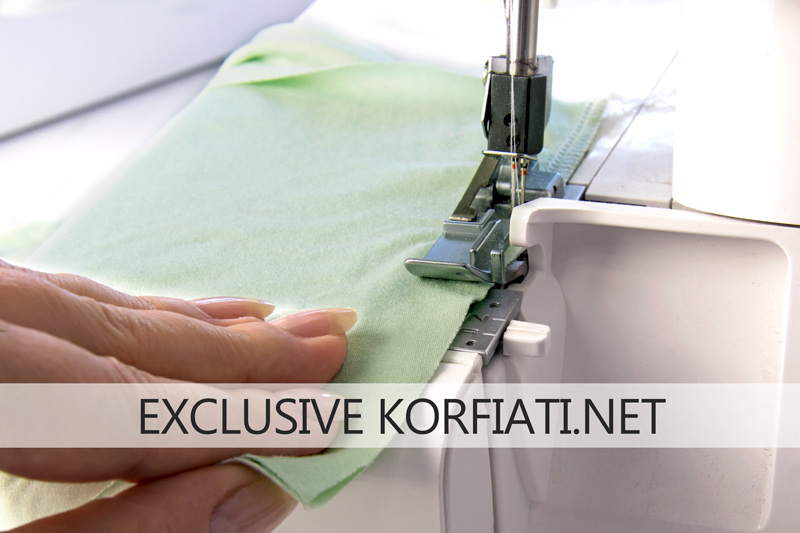 Attach a special Jersey N 75 needle and a foot for knitwear to the sewing machine (if you do not have such a foot, you can use a standard foot by adjusting its pressure on the fabric). Overlock the top allowance of the pocket, fold and iron. Sew the top pocket seam on the sewing machine. 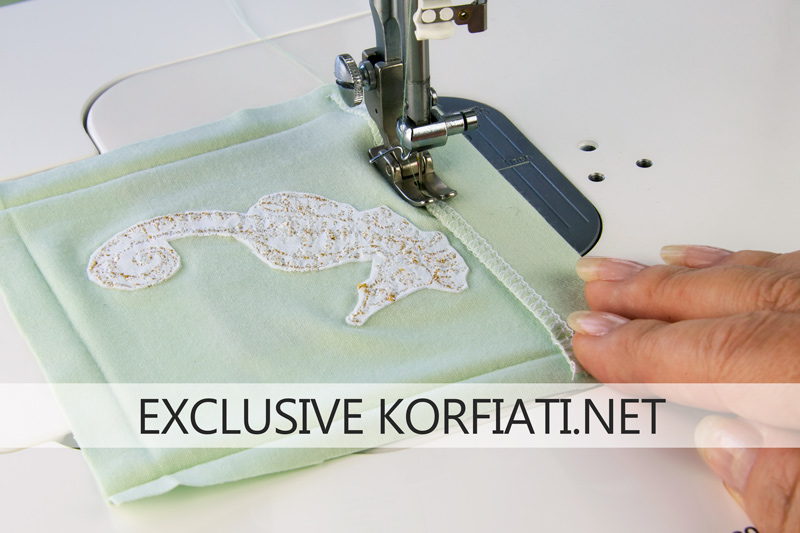 Pic. 2. Sew the top pocket seam on the sewing machine

Important! The pocket is decorated with embroidery No. 9 “Seahorse” from the collection of exclusive drawings by Brother. See Brother Innov-is F480 sewing and embroidery machine review for more details. 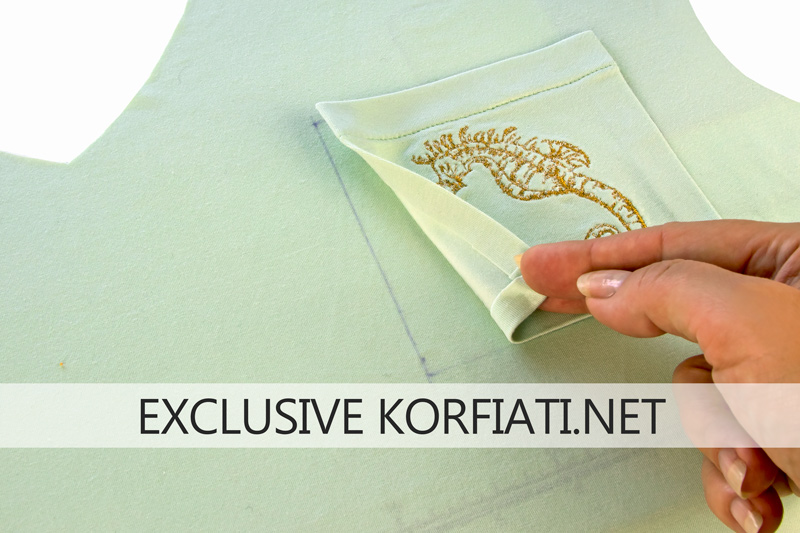 Pic. 3. The pocket is decorated with embroidery No. 9 “Seahorse”

Fold the allowances on the other three sides of the pocket, put the pocket on the front of the T-shirt according to the markup, for better fixation, you can pin the pocket. Sew the pocket along the markings close to the edge. 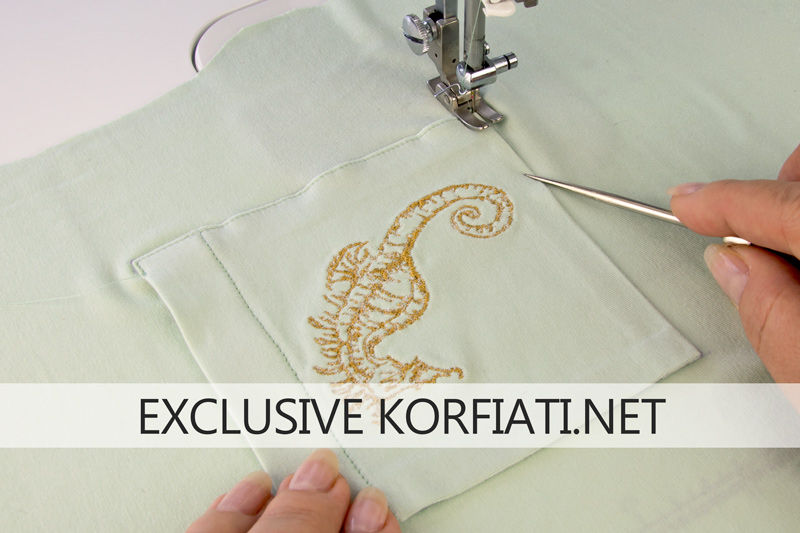 Fold the bias tape in half with the right side out and iron, slightly pulling. Sew the bias tape to the neckline with an overlock stitch, pulling it lightly as you sew. 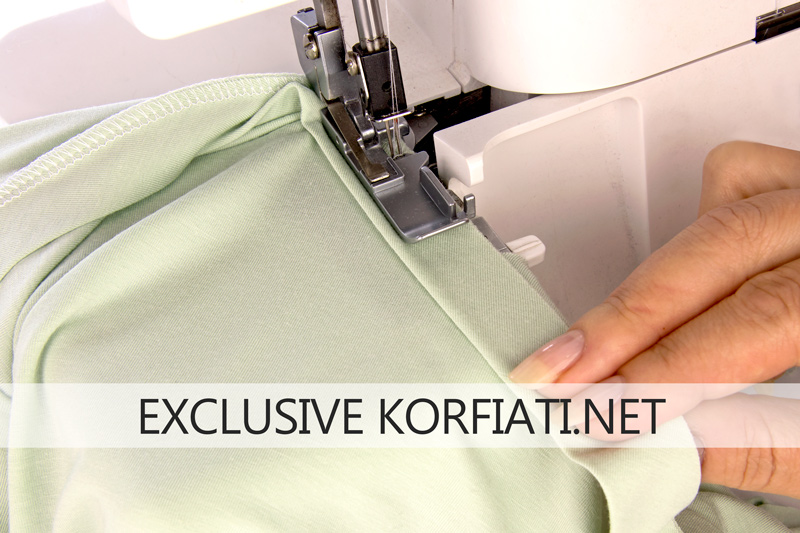 Pic. 5. Sew the bias tape to the neckline 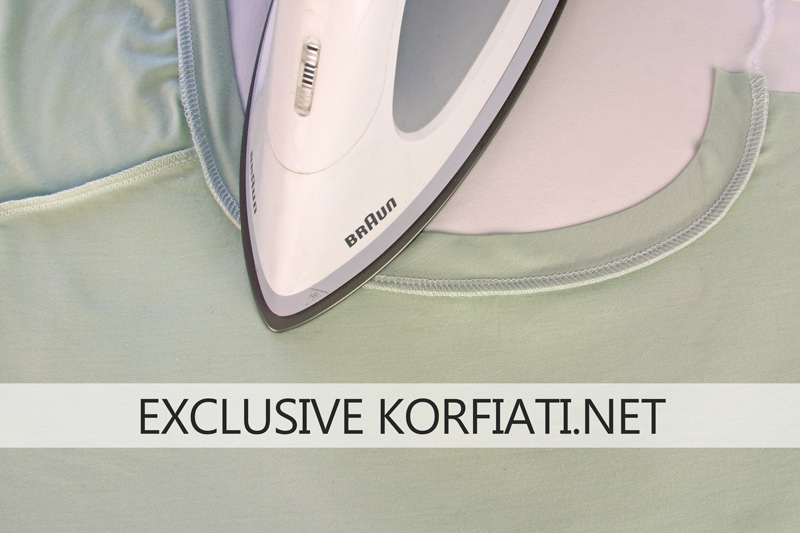 Pic. 6. Bend the seam over the bias tape and iron

The overlock seam along the neckline of the back on T-shirt is usually covered with bias tape. With this finishing the T-shirt looks much better and neater.

Cut out a 2 cm wide bias tape from the base material. Fold it in half and iron. Sew the bias tape with a straight stitch along the neckline of the back. 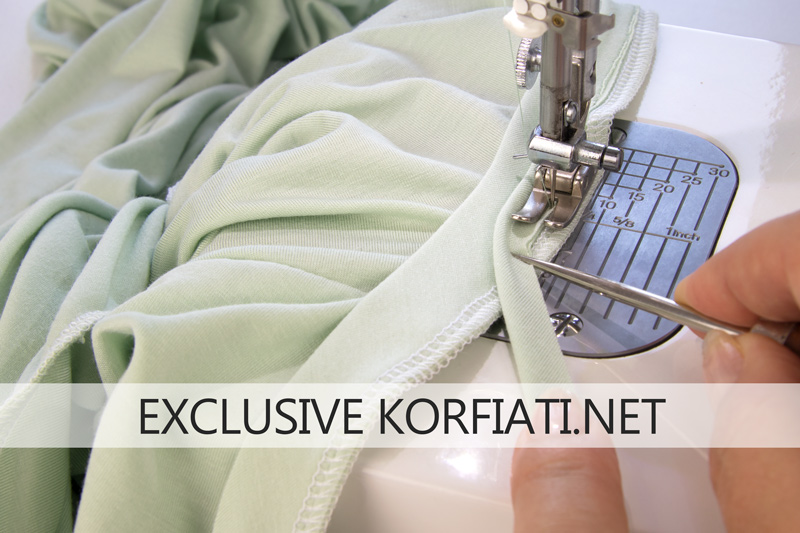 Pic. 7. Sew the bias tape with a straight stitch along the neckline of the back

The second seam is to the left of the first seam, as shown in fig. 9. At the beginning and end of the seam pull the tape to the right and start/end the seam. 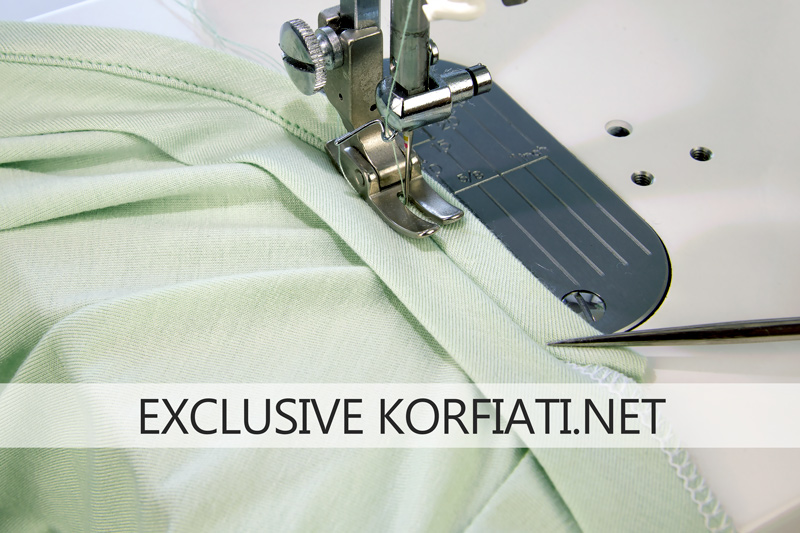 Sew the tape along the second edge. At the beginning and at the end of the section, gently fold the tape as shown in fig. 9 and finish the seam, iron. 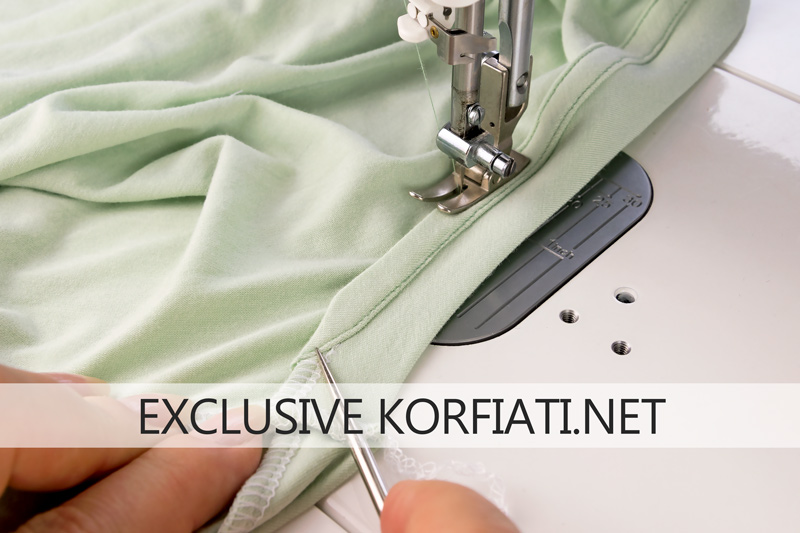 Pic. 9. Sew the tape along the second edge

Fold the front along the center line and re-stitch the tape at a 45° angle. 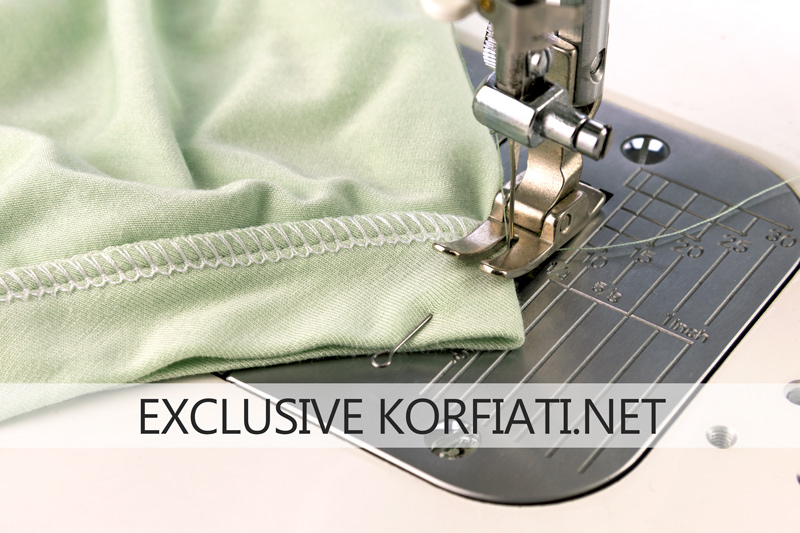 Stitch the neckline of the T-shirt. 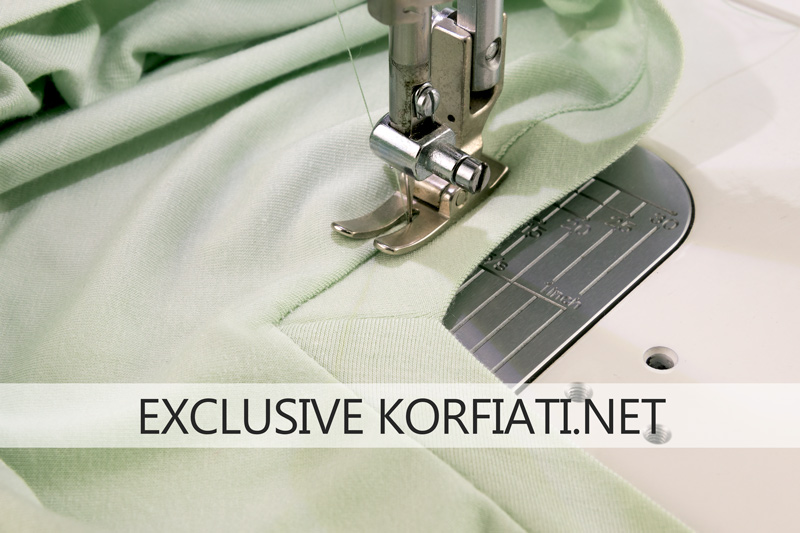 Sew the sleeves into the open armholes. 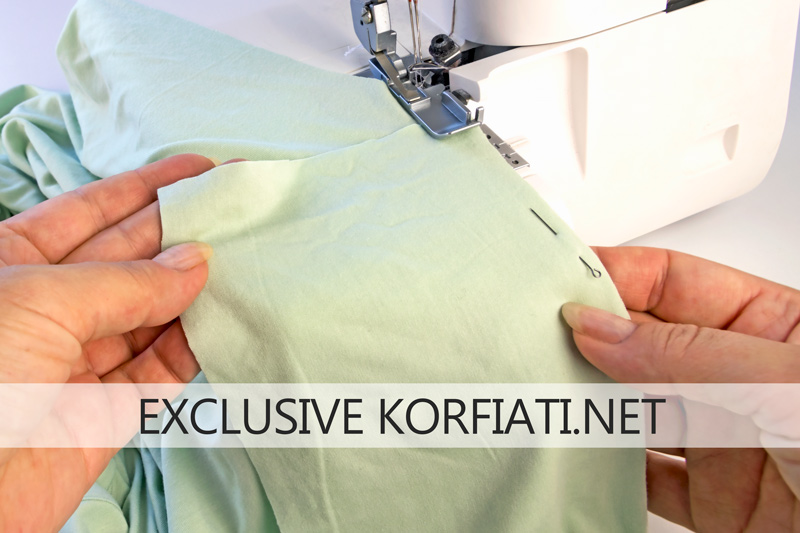 Hems are the topstitch with a sewing machine. 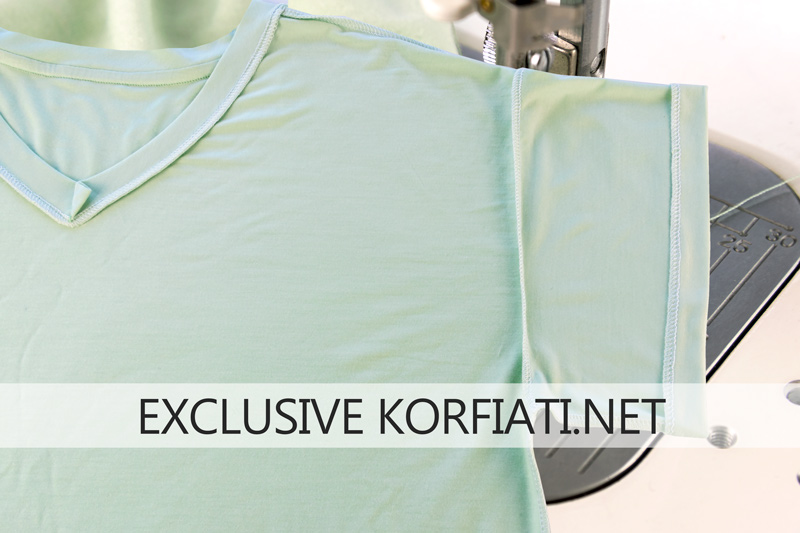 Pic. 13. Hems are the topstitch with a sewing machine

Hems are the topstitch with a sewing machine.

Pic. 14. Hems are the topstitch with a sewing machine

T-shirt is the best! 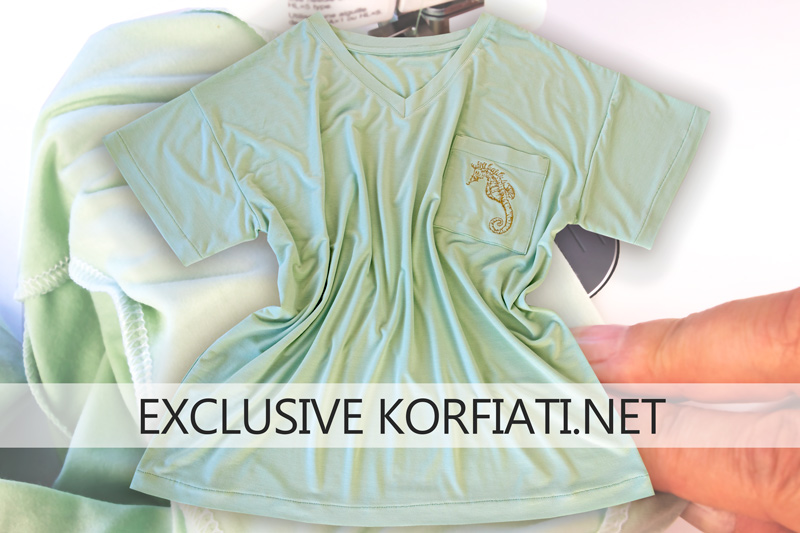 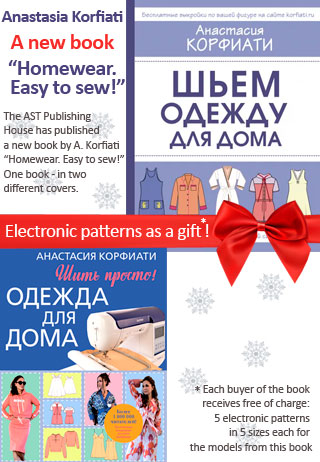